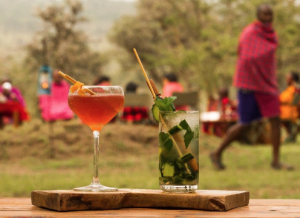 Arusha (Tanzania) – February 9, 2018 (travelindex.com) – Asilia Africa is proud to announce the introduction of biodegradable straws in all its camps. “Waste reduction is one part of our sustainability drive,” says Cai Tjeenk Willink, Asilia’s Group Operations Manager.

Plastic waste is a worldwide problem with 10 million tons being generated each year.
Made from organically grown rye that have no chemicals or bleaches added, the straws are completely biodegradable and compostable.

Similarly, Asilia has removed all cotton buds from its camps. Cling film was banned several years ago, and the introduction of reusable stainless steel water bottles means less plastic waste. In 2016 the company replaced all lunch packs with biodegradable containers and cutlery made from sugarcane, paper and wood.

While senior management comes up with the guidelines for sustainability, the details and ideas on how we implement this are originating from our camps. As a positive impact company sustainability is ingrained in Asilia’s DNA.
“We’re aiming for the complete elimination of single-use plastics in our operations,” says Tjeenk Willink.

About Asilia Africa
Founded in 2004, Asilia Africa has a leading presence in the main safari destinations in Tanzania and Kenya as well as a driving role in a number of pioneering projects. Asilia operates Naboisho Camp in the Naboisho Conservancy and is a partner with Ol Pejeta Bush Camp in the Ol Pejeta Conservancy. Our rehabituation of chimpanzee on Rubondo Island is fundamental to the rewilding of this tropical island. Asilia is now the largest single investor in responsible tourism in southern Tanzania and contributes significantly to mitigating human-wildlife conflict around the protected areas. Asilia is the first Sustainable Safari / Lodge Company in Africa to receive a 5 Star rating for Sustainability from GIIRS, was recognized as one of the “Best Companies for the World” in 2013 and was awarded the 2014 Tourism for Tomorrow Business Award.