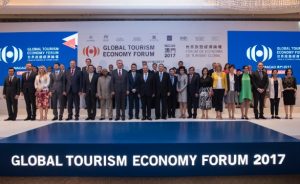 Macao (Macao SAR) – October 17, 2017 (travelindex.com) – The Chief Executive of the Macao Special Administrative Region, Chui Sai On, was present in the closing ceremony of Global Tourism Economy Forum Macao 2017 (GTEF). Hosted by the Secretariat for Social Affairs and Culture of the Macao SAR Government, the Forum supports China’s Belt and Road Initiative and embraces the “16+1” economic framework between China and the 16 Central and Eastern European Countries (CEE) in this edition. Through a range of themed panel sessions and business networking functions, the Forum fostered an in-depth exchange of perspectives among industry stakeholders from near and afar across the world. While radiating Macao’s unique strengths and role as a platform, GTEF 2017 culminated in a fruitful harvest.

Ministerial officials, industry leaders and scholars from worldwide share insights
Under the theme of “Regional Collaboration towards a Better Future”, this sixth edition of GTEF brought together around 1,500 ministerial officials of tourism and related sectors, industry leaders, experts, scholars and participants from across the globe into a series of profound discussions on how regional tourism collaboration can give an impetus to the implementation of the Belt and Road Initiative and sustainable global tourism development. The Forum also rolled out an array of business matching and presentation sessions to foster interchanges among tourism corporations at home and abroad and facilitate their practice of the “bring in and go global” strategy. This edition of the Forum featured the 16 Central and Eastern European Countries as the Partner Region and Guizhou Province as the Partner Province. The two-day event was covered by over 150 international and domestic members of the press.

Conclude experience and look forward to the next edition
The closing ceremony of Global Tourism Economy Forum Macao 2017 was held this noon (17 October) at the Macau Tower Convention and Entertainment Centre. Chief Executive of the Macao SAR, Chui Sai On, Vice Chairman of the National Committee of the Chinese People’s Political Consultative Conference and Forum Chairman of GTEF, Ho Hau Wah, and Secretary-General of the World Tourism Organization (UNWTO) and Honorary Chairman of GTEF, Taleb Rifai were among the guests at the closing ceremony. Secretary for Social Affairs and Culture of the Macao SAR Government and Executive Chairman of GTEF, Alexis Tam delivered a closing speech. Vice Chairman and Secretary-General of GTEF, Pansy Ho concluded the Forum.

Secretary for Social Affairs and Culture of the Macao SAR Government and Executive Chairman of GTEF, Alexis Tam, remarked in his closing speech that, the widening scope of participation in the Forum speaks volume to the increasing influence of the Forum as a remarkable example of embracing regional collaboration. Against the backdrop of the promising “16+1” economic framework between China and the Central and Eastern European Countries, this year’s Forum invited the 16 Central and Eastern European Countries to jointly participate as Partner Region. In these two days, delegates have been inspired by the CEEC perspectives on regional collaboration, which are as profound and diverse as their cultures and history. The “16+1” framework plants the seed of China’s Belt and Road Initiative in Europe where it is growing and flourishing. CEEC’s participation in this edition of GTEF opens another window of opportunity for further regional co-operation in the field of tourism. Riding on the momentum of the China-Europe tie, the Forum will broaden the scope of collaboration and invite the European Union to be Partner Region in the next edition.

Secretary Tam also emphasized the commitment to pursuing the vision of building an advanced international tourism platform that brings together decision makers and leaders of the global tourism industry, bridges the gap between different countries and regions, and forges partnerships among industry operators from both the public and private sectors. As the host of the Forum, the Secretariat for Social Affairs and Culture of the Macao SAR Government leverages the unique system, culture and geographic advantages of Macao to extend the collaboration across different cultures, sectors and territories, and readily multiply the momentum, scale and impact of the Forum with the valuable experiences culminated over the past few years.

He stated, “The Forum has underscored the remarkable role of our city in the region. Not only is Macao eagerly seizing the opportunity of the Belt and Road Initiative, we are also a core member in the China’s strategic planning of the Guangdong-Hong Kong-Macao Greater Bay Area development. We task ourselves to enhance the synergy effect these national projects will play with our own positioning as the world centre of tourism and leisure, as well as the platform between China and the Portuguese-speaking countries. In this context, we are also actively consolidating Macao as a hub where traditional Chinese culture prevails and other cultures flourish in harmony.”

Secretary Tam concluded, “With the fresh inspirations gained and international network built during this Forum, I encourage you to capitalize on the possibilities brought by the Belt and Road Initiative, share your strengths and synchronize your efforts in strategic partnerships. Together, we can build a strategic foundation on which a healthy and sustainable tourism industry will develop.”

Vice Chairman and Secretary‐General of GTEF, Pansy Ho, concluded this edition, “With political will, psychological consensus and mutual trust, regional collaboration can create a sustainable ecosystem likened to a spider web, a dynamic hub-and-spoke framework with meticulously woven strands of web in just the right places, all interrelated, interdependent, indispensable, and strategically aligned with the overall structure to create a collective outcome.”

Accompanied by Vice Chairman and Secretary-General of GTEF, Pansy Ho in the closing ceremony, Secretary for Social Affairs and Culture of the Macao SAR Government and Executive Chairman of GTEF, Alexis Tam, presented a gift to Secretary-General of UNWTO and Honorary Chairman of GTEF, Taleb Rifai, as a token of appreciation for his care for Macao’s tourism industry over the years and his immense support to the Forum, as well as a kind regard for him before he finishes his term at the end of this year.

Following the gift presentation, a group photo was taken for Chief Executive of the Macao SAR, Chui Sai On, and Vice Chairman of the National Committee of the Chinese People’s Political Consultative Conference and Forum Chairman of GTEF, Ho Hau Wah, together with other officiating guests. Global Tourism Economy Forum • Macao 2017 was successfully concluded.

During the Forum, UNWTO and the Global Tourism Economy Research Centre (GTERC) together presented their fourth annual joint research report of UNWTO/GTERC Asia Tourism Trends. The 2017 report analyzes the prospect of future tourism development in Asia, with the hope to guide decision makers and industry leaders in their formulation of long-term development plans and adoption of development models for closer collaboration by capitalizing on modern technology and their strengths, to advance sustainable development of the regional tourism industry and the global tourism economy.

Carrying on the productive results of the past sixth editions, the host of the Forum is committed to marking innovative chapters on the program and format of the next edition, with the aim to enable delegates to forge far-reaching tourism cooperation across industries, sectors and regions through the Forum as an international exchange platform.

The Global Tourism Economy Forum • Macao 2017 is hosted by the Secretariat for Social Affairs and Culture of the Macao SAR Government in collaboration with the World Tourism Organization, co-organized by the China Chamber of Tourism and coordinated by the Global Tourism Economy Research Centre. The Forum’s supporting units include China National Tourism Administration, All-China Federation of Industry and Commerce, the Liaison Office of the Central People’s Government in the Macao SAR, Office of the Commissioner of the Ministry of Foreign Affairs of the People’s Republic of China in the Macao SAR, Macao Government Tourism Office, World Travel and Tourism Council, Pacific Asia Travel Association, World Tourism Cities Federation and European Travel Commission.